 Summary: FREE biographies of all US presidential candidates 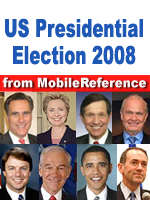 Example of the Article about John McCain

John Sidney McCain III (born August 29, 1936) is the senior United States Senator from Arizona and a candidate for the Republican Party nomination in the 2008 presidential election.

Both McCain's grandfather and father were Admirals in the United States Navy. McCain also attended the United States Naval Academy and finished near the bottom of his graduating class in 1958. McCain became a naval aviator flying attack aircraft from carriers. Participating in the Vietnam War, he narrowly escaped death during the 1967 Forrestal fire. On his 23rd bombing mission over North Vietnam later in 1967, he was shot down and badly injured. He endured five and a half years as a prisoner of war, including periods of torture, before he was released following the Paris Peace Accords in 1973.