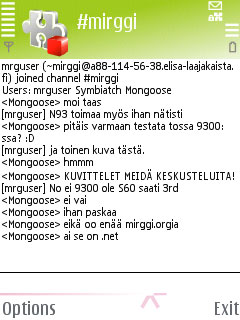 mIRGGI is the first IRC client for S60 3rd Edition devices. It is currently in early stages because I just began writing it on 10th of March. I've been meaning to do this for a long time but haven't gotten to it. I don't like the J2ME IRC clients (one big reason is that they suck up a lot of memory on S60) and I don't like using PuTTY, especially on devices without keyboard. Also their fonts are quite ugly (I like small vector fonts, as is obvious from this release :)

This is a hobby project and mainly targeted at my needs but I will try to find some relaxing time to enhance it. And especially the things that bother me personally will get fixed fast. There are most certainly some bugs but I have successfully used it for several hours at a time via GPRS without problems.

There will be also a version for 2nd Edition devices later on. mIRGGI has also been seen for a selected few as a terminal IRC client for Linux and Windows. Those versions haven't been updated for a loooong time and were never really released. I might do a version for Windows Mobile someday, too. 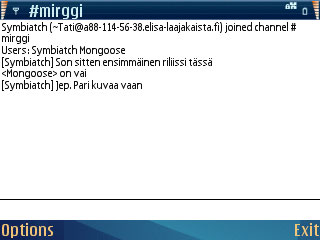 mIRGGI contains the following functionality:
* connecting to one server
* joining channels
* query windows for private chatting
* 10k per channel/query backlog
* jumping to desired window with numpad
* ident daemon
* UTF-8 decoding
* T9 can be used
* usually needed commands implemented
* the font is small and nice (at least on tested devices)
* the memory requirements should be very small
* settings for autojoin and autoquery on connection
* will not be bloated with unneeded themes, skins, scripts, now playing -crap etc

i want freewares for nokia 3250 3rd edition where i can i have them, please help me.

this is really good soft . i really enjoy it

I need application for my s80 Nokia 9500 .. like IRC client , web browser (not Opera becouse is not working) and all that stuff.. thanks

My phone won't allow this app to install, claiming the security certificate has expired!

Says certificate expired even though app. manager should allow all programs and no cert. check.. :( (?!?)

N95, certificate has expired. Does not install.

thanks,it's nice site for me

E50, certificate has expired. Does not install.

Found a working version at http://mirggi.jutut.fi/

y is that i cant download mirggi on my N95? Its very frustrating