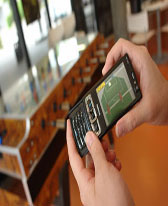 » pyWuzzler Description
Share   Tweet
The idea of pyWuzzler is to use the acceleration sensor of the mobile phone Nokia N95 to play a table soccer game.

As it would be difficult to squeeze the whole soccer table into the small display, the game concentrates on the head-to-head match of the two attacking players against the goalkeeper. You control the players of the attacking row, the goalkeeper is controlled by an AI to make it more difficult to score a goal. The main objective of the game is to score as many goals as possible in two minutes.

The main feature of the game is the use of the accelerometer of the phone to control the attacking players.

Attacking players (red) can be moved through a sidewise change of the inclination of the mobile phone. A shot can be triggered by turning the phone. The goalkeeper (blue) is controlled by an artificial intelligence to prevent the player from scoring too easily.

In addition, realistic ball physics were integrated. Therefore, the ball will bounce off objects such as the wall, players and the goalkeeper. The speed of the ball will be reduced through bouncing off objects and the ball friction. The ball position will be reset once the ball speed falls below a certain threshold or rolls back behind the attacking players.

At the beginning, the ball physics are simplified. The ball can only be moved sidewise to make it easier for the player to pass the ball between the attacking players. Through this mechanism, the player wonât lose the ball so easily. The ball will move in all directions and bounce off other objects after a shoot is performed.

The game was developed as a prototype concept for the course "Interaction Technology", so there might be a few bugs and performance problems. It is available for the S60 3.x platform with Python installed. The game will only work on S60 3rd Ed. devices with integrated accelerometer (tested with the Nokia N95).

Note: pyWuzzler has to be installed on the same drive as PyS60 (C: for internal memory or E: for external memory) â otherwise the game wonât start! It is highly recommended to deactivate automatic screen rotation.